The 2015-16 Virginia Cavaliers ended with an overall record of 29-8 with a 2nd place, 13-5 finish in the Atlantic Coast Conference. They lost in the ACC Tournament Championship game to North Carolina. The Cavs were a #1 seed in the NCAA Tourney where they eventually lost in the Elite Eight to ACC member, Syracuse.

This season, Virginia will host #18 West Virginia on December 3rd and will travel to Philadelphia, PA to face #3 , defending national champion, Villanova Wildcats.

A loaded conference schedule includes: #14 Louisville, December 28 at Louisville and February 6th at home and will visit #17 Syracuse on February 4th. The Cavaliers will also host #1 Duke on February 15th and #6 North Carolina on February 27th and will travel to Chapel Hill February 18th. 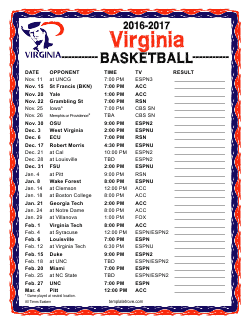