The Cardinals will travel to the Bahamas, November 23rd through 25th to participate in the Battle 4 Atlantis Tournament. They will play Old Dominion on the 23rd with possible opponents LSU or Wichita State in round 2.  The Cardinals will host #15 Purdue on November 30th in the ACC/Big Ten Challenge. They will also host #4 Kentucky on December 21st and will play #12 Indiana in Indianapolis on New Year's Eve.

Ranked opponents in the ACC include: Virginia, December 28th at home and February 6th in Charlottesville, they host #1 Duke on December 14th, at #17 Syracuse on February 13th and at home on February 26th and will travel to #6 North Carolina on February 22nd. 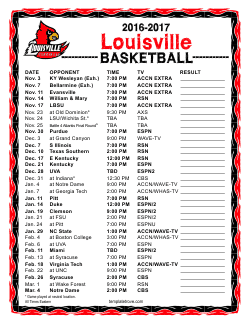