The Syracuse Orange completed the 2015-16 season with a record of 23-14, and a 9-9 Atlantic Coast Conference record where they ended in a tie for 9th place. The Orange lost in the second round of the ACC Conference Tournament to Pittsburg.

Syracuse received a #10 seed in the NCAA Tournament and won four games before losing in the Final Four to North Carolina.

This season, Syracuse will play at #10 Wisconsin, November 29th in the ACC/Big Ten Challenge.

Games against ranked conference teams include: #6 North Carolina on January 16th at Chapel Hill, #7 Virginia at home on February 4th, #14 Louisville at home February 13th and at Louisville February 26th. They will also host #1 Duke on February 22nd. 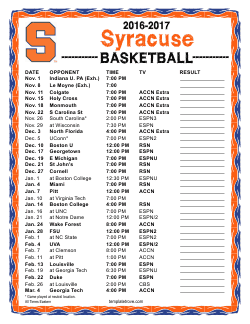