The Duke Blue Devils finished the 2015-16 season with a record of 25-11 and an 11-7 ACC Conference mark. The Blue Devils lost to Notre Dame 84-79 in overtime in the ACC Tournament Quarterfinals. Duke landed in the NCAA Tournament's West Region as a #4 seed. After winning their first two games, they were defeated by Oregon in the West Semi-Finals.

This season, Duke will play Kansas in the State Farm Champions Classic, November 15th in New York City. They will host Michigan State, November 29th in the ACC/Big Ten Challenge and will also play Florida in New York, December 6th in the Jimmy V Classic.

Duke will host #6 North Carolina, February 9th and will travel to Chapel Hill to end the regular season March 4th. They will also face #14 Louisville at the Yum Center on January 14th and will also be on the road against #7 Virginia, February 15th. 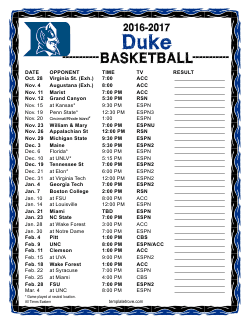