In the 2015-16 season, North Carolina went 33-17 overall and 14-4 in the ACC. The Tar Heels won both the regular season title and the conference tournament in the Atlantic Coast Conference. The Heels were the East Region #1 seed in the NCAA Tourney, where they made it to the championship game and fell at the hands of Villanova 64-59.

This season North Carolina will play in the Maui Invitational November 21st through 23rd and will also play at #12 Indiana in the ACC/Big Ten Challenge, November 30th. UNC will face #4 Kentucky in the CBS Sports Classic in Las Vegas on December 17th.

Ranked opponents in the ACC at home include: #17 Syracuse on January 16th, #7 Virginia on February 18th, #14 Louisville on February 22nd and March 4th verses #1 Duke. ACC road games have the Tar Heels at Duke on February 9th, and at Virginia February 27th. 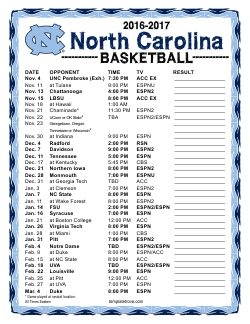