The Patriots finished the 2015 regular season at 12-4 and were the AFC East Champions. New England was defeated by the eventual champion Denver Broncos 20-18 in the AFC Conference Championship game. The Pats won Super Bowls in the  2014, 2004, 2003 and 2001 seasons. The only year that the Patriots missed the playoffs since 2003 was 2008.

New England competes in the AFC East with the New York Jets, Buffalo Bills and the Miami Dolphins.

Week 14 will be the only Monday Night Football appearance for New England where they will face the Baltimore Ravens at home. Week 3 features a Thursday night showdown at home verses the Houston Texans. The Patriots also have three Sunday night primetime games: week 1 at Arizona, week 10 when they host Seattle and week 12 at the New York Jets. 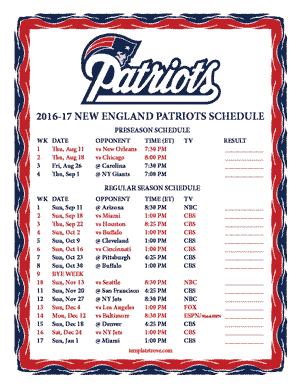