Minnesota finished the 2015 regular season with the NFC's third best record, 11-5. They were the NFC North Champions and lost to the Seattle Seahawks 10-9 on Wildcard Weekend. Last year was the first trip to the playoffs for the Vikings since 2012.

The Vikings will play two Monday Night games, week 4 when they will host the New York Giants, and week 8, where they will travel to Chicago to play the Bears. They also play primetime tilts week 2 on Sunday Night verses Green Bay at home, and the regular Thanksgiving game week 12 at Detroit. They will also host Dallas week 13 on Thursday night. 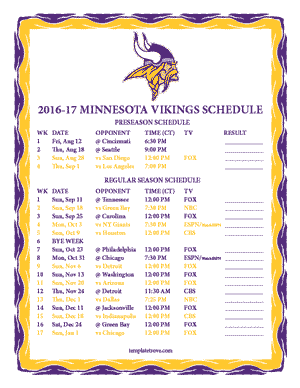