Green Bay finished the 2015 regular season with a 10-6 record. The were a wild card representative in the NFC in the playoffs. They eventually lost in the Divisional game 26-20 to the Arizona Cardinals in overtime. The Packers have made the playoffs every year since the 2009 season and were the 2010 Super Bowl champions.

The Packers will play at Philadelphia in week 12 on Monday Night Football and will host the Chicago Bears week 7, at home. They will also play three Sunday Night prime time games: week 2 at Minnesota, week 5 at home verses the NY Giants and week 11 at Washington. 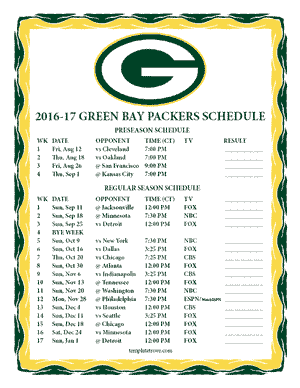