The 2015-16 Xavier Musketeers ended the season with an overall record of 28-6. They finished as runner-up in the Big East Conference regular season standings at 14-4. Xavier lost in the Big East Tournament semi-finals to Seton Hall. As a #2 seed in the NCAA Tournament they lost to Wisconsin in the second round.

This year, the Musketeers will travel to Orlando, Florida for the Tire Pros Invitational from November 17th through the 20th. They will also face #25 Cincinnati, January 25th on the road.

Ranked conference foes include: #23 Creighton, January 16th at home and in Omaha on February 4th. They will also play at the defending national champion #3 Villanova Wildcats on January 10th and will host them February 11th. 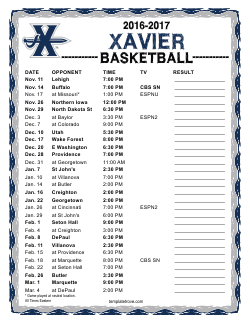