The 2015-16 Villanova Wildcats finished the season with a 35-5 record. In the Big East Conference regular season, they ended 16-2 as champions. Villanova lost in the championship game of the Big East Tournament to Seton Hall. The Wildcats entered the NCAA Tournament as a #2 seed and ran the table to become the 2016 National Champions, their second title.

This season, the reigning national champions will travel to West Lafayette, Indiana to take on the #15 Purdue Boilermakers on November 14th. They will also play #6 Virginia at home on January 29th.

They will play ranked conference opponent #23 Creighton in Omaha, Nebraska on New Year's Eve and at home February 25th. #8 Xavier will visit Villanova on January 10th and the Cats will play them on February 11th in Cincinnati. 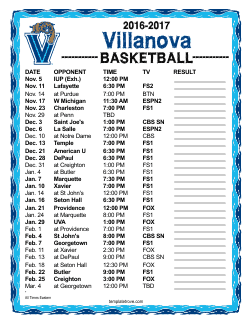