The Texas Longhorns finished the 2015-16 season 20-13, 11-7 in Big 12 play to finish in 4th place. In the Big 12 Tournament, they lost in the Quarterfinals to Baylor. The Longhorns also lost in the First Round of the NCAA Tournament to Northern Iowa.

This season, Texas will compete in the Legends Classic which runs from November 14th through the 22nd, the championship round will be played in Brooklyn, NY. They will also play Arkansas in the Lone Star Shootout in Houston, TX on December 17th. The SEC/Big 12 Challenge game features the Longhorns playing at Georgia in Athens on January 28th.

Ranked Big 12 Conference teams include: at #2 Kansas, January 21st and at home on February 25th, #18 West Virginia at home on January 14th and in Morgantown on February 20th.

The Big 12 Conference Tournament will be held March 8 through March 11 at the Sprint Center in Kansas City. 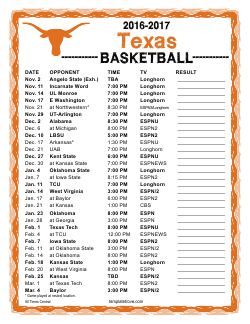