The 2015-16 Kansas Jayhawks finished the year with an overall record of 33-5, they were Big 12 regular season champions with a conference record of 15-3. Kansas also won the Big 12 Tournament title, defeating West Virginia in the championship game. The Jayhawks were rewarded with the #1 overall seed in the NCAA Tournament and were placed in the South Region where they won 3 games before losing to the eventual national champions, Villanova, in the Elite Eight.

This year's schedule includes a trip to Honolulu, Hawaii where they will face #12 Indiana in the State Farm Armed Forces Classic. They will play #1 Duke, November 15th in the State Farm Champions Classic in Madison Square Garden. They will also travel to #4 Kentucky for the Sonic SEC/Big 12 Challenge on January 28th.

Ranked Big 12 Conference foes include: #22 Texas, January 21 at home and at Texas on February 25th, #18 West Virginia in Morgantown on January 24th and at home February 13th.

The Big 12 Conference Tournament will be held March 8 through March 11 at the Sprint Center in Kansas City. 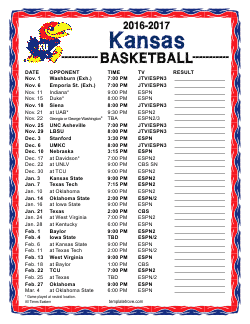