The Raiders ended the 2015 season with a record of 7-9. Oakland hasn't been to the playoffs since the 2002 season, a 13 year drought. The Raiders have won three Super Bowls.

Oakland plays in the AFC West with the Denver Broncos, Kansas City Chiefs and the San Diego Chargers.

The Raiders primetime appearances this season include a week 11 game at home verses the Houston Texans. They will also travel to Kansas City, week 14 for a Thursday night tilt and will play the defending champion Broncos at home in a week 9 Sunday Night game. 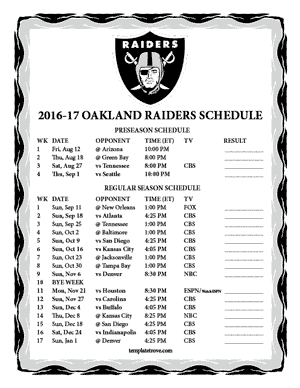