The Denver Broncos were the 2015 NFL Super Bowl winners. On the way to the Super Bowl, the Broncos defeated Pittsburgh 23-16, New England 20-18 and upended the Carolina Panthers 24-10 in the big game. They finished the regular season with a 12-4 record. Denver also won Super Bowls in the 1997 and 1998 seasons.

Denver competes in the AFC West with the Kansas City Chiefs, Oakland Riaders and the San Diego Chargers.

The Broncos will play Houston at home in week 7's Monday Night Football game. They also open the 2016 regular season at home on Thursday night in a rematch with the Panthers. Denver also plays week 6 Thursday night game at San Diego and Sunday night primetime games week 9 at Oakland and week 16 at Kansas City. 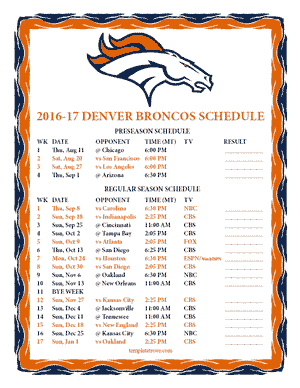