The Chiefs 2015 season ended in the Divisional Round of the Playoffs where they lost 27-20 to the Patriots. They defeated the Houston Texans 30-0 Wild Card weekend and ended the regular season with a 11-5 record. 2015 was the first time the Chiefs won a playoff game since1993. Kansas City won the Super Bowl in 1969.

Kansas City competes in the AFC West with the Denver Broncos, Oakland Riaders and the San Diego Chargers.

The Chiefs will not make a Monday Night Football appearance this season but will have a Thursday Night primetime game week at home against Oakland. They also have Sunday Night games week 4 at Pittsburgh and week 16 at home verses the defending champion Denver Broncos. 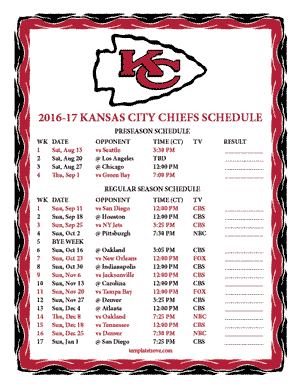