They compete in the NFC East with the Philadelphia Eagles, Dallas Cowboys and the Washington Redskins.

New York will play two Monday Night Football games this season, week 4 at Minnesota and will host the Cincinnati Bengals week 10. Prime time Sunday Night games for the Giants are week 5 at Green Bay and week 14 at home verses the Dallas Cowboys. The Giants will also play week 7 in the United Kingdom with a 9:30 a.m. kickoff. 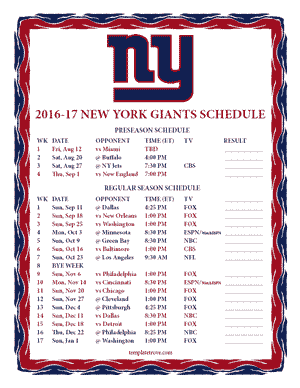