The 2015-16 Saint Mary's Gaels finished with a 15-3 West Coast Conference regular season record which earned them a share of the WCC regular season title. The Gaels advanced to the championship game of the WCC Tournament before falling to Gonzaga.

St. Mary's 29-6 overall record landed them as a #2 seed in the NIT Tournament where they defeated New Mexico State and Georgia before losing to Valparaiso in the quarterfinals.

There are no ranked teams on the schedule for the 2016-17 season.

The West Coast Conference Tournament will be held March 2 through March 7 in Las Vegas, NV. 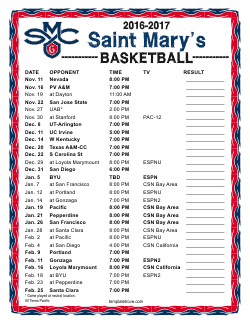