The 2015-16 Gonzaga Bulldogs finished the season at 28-8, 15-3 in the West Coast Conference for a share of the conference regular season championship. The Zags also won the WCC Tournament Championship and advanced to the NCAA Tournament as an 11 seed. In the NCAA tourney they advanced to the Sweet 16 where they lost to Syracuse.

This year's Zags will compete in the AdvoCare Invitational in Orlando, Florida November 24 through 27. They will also play #11 Arizona in Los Angeles, California on December 3rd. Another notable out of conference game includes a trip to Nashville, Tennessee to play the Volunteers on December 18.

The Saint Mary's Gaels are the only ranked conference opponent, they will play them at home on January 14th and travel to Moraga for a tilt on February 11th.

The West Coast Conference Tournament will be held March 2 through March 7 in Las Vegas, NV. 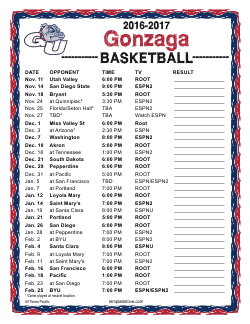