The Michigan State Spartans finished the 2015-16 season with an overall record of 29-6 and a 13-5 Big Ten record finishing as runner-up to Indiana. The Spartans won the Big Ten Tournament. As a #2 seed in the NCAA Tournament they were defeated by #15 seed Middle Tennessee in the first round, a defeat that many consider the greatest upset in NCAA history.

This season the Spartans will face #4 Kentucky on November 15th in the Champions Classic in New York, NY. They will also compete in the Battle 4 Atlantis November 20th through 25th. A date with #14 Louisville in the championship game is possible. Michigan State will also play at #1 Duke in the ACC/Big Ten Challenge on November 29th.

Big Ten Conference games include: January 21st at #12 Indiana, #15 Purdue on January 29th at home and February 18th in West Lafayette, and #10 Wisconsin on either February 25th or 26th.

The Big Ten Conference Tournament will be held March 8 through March 12 at the Verizon Center in Washington, D.C. 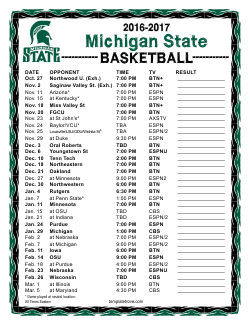