Jacksonville plays in the AFC South with the Houston Texans, Jacksonville Jaguars and the Tennessee Titans.

The Colts open the preseason schedule in the Hall of Fame game against the Green Bay Packers on Sunday, August 7. They also play a week 13 Monday Night game at the New York Jets. They will also play in London's Wimbley Stadium, week 4 verses Jacksonville in a 9:30 a.m. kickoff.

Indianapolis will play at home against Pittsburgh week 12 on Thanksgiving. They also have a week 6 Sunday Night game at Houston. 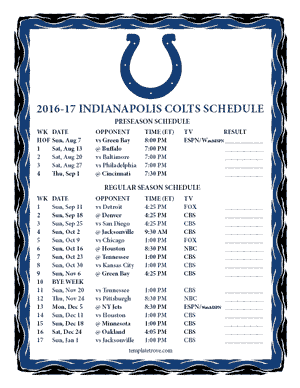