The 2015-16 Rhode Island Rams basketball team finished with an overall record of 17-15 and an Atlantic 10 Conference mark of 9-9 and finished in 7th place. Their season ended with a loss to UMass in the second round of the A-10 Tournament.

This year, the Rams will play #25 Cincinnati in Uncasville, CT with a possible championship matchup with #1 Duke on November 20th.

There are no other ranked teams in the A-10 to open the season.

The Atlantic 10 Conference Tournament will be held March 8 through March 12 at the PPG Paints Center in Pittsburg, PA. 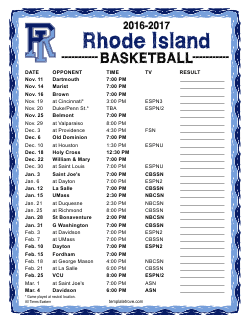