The 2015-16 Kentucky Wildcats ended the season with a 27-9 record. A 13-5 SEC Conference record was good enough to earn a share of the SEC regular season championship, they also won the SEC Tournament Championship. The Cats landed as a 4 seed in the East Region of the NCAA Tournament. After winning their first game, they were eliminated by Indiana.

Kentucky will play #9 Michigan State, November 15th at Madison Square Garden in the State Farm Champions Classic. Other games against ranked opponents include: December 17th in Las Vegas, Nevada where they will face #6 North Carolina, December 21st at #14 Louisville and will host #20 UCLA on December 3rd.

There are no ranked SEC opponents in the Preseason Coaches poll.

The Southeastern Conference Tournament will be held March 8 through March 12 at Bridgestone Arena in Nashville, Tennessee. 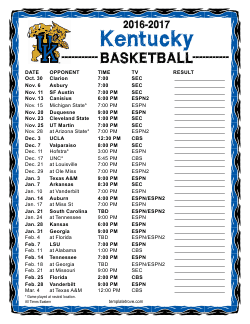