The Arizona Wildcats finished 3rd in the 2015-16 Pac-12 Conference with a record of 12-6 and an overall record of 25-9. They lost in the semi-finals of the Pac-12 conference tournament and received an at-large bid as a #6 seed in the NCAA Tournament. The Wildcats lost in the first round to Wichita State 65-55.

Arizona will play Michigan State on November 11 in the Armed Forces Classic in Honolulu, Hawaii. They will also compete in the Las Vegas Invitational November 24th and 25th and will play Gonzaga on December 3rd in the Naismith Memorial Basketball Hall of Fame Game.

Conference foes include the ranked UCLA Bruins and Oregon Ducks. The regular season will conclude with a trip to Tempe, Arizona to play Arizona State.

The Pac-12 Tournament runs from March 8 through March 11 in Las Vegas, Nevada. 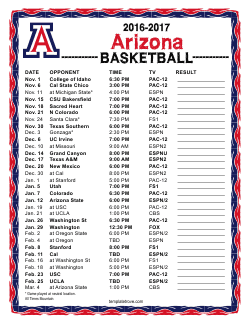